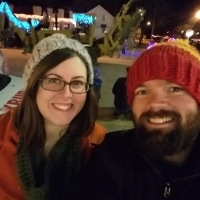 Seth was born and raised in central Missouri. He attended Central Christian College of the Bible in Moberly, MO where he earned a degree in Christian Education in 2008. While at CCCB, he met his wife, Carol, and married in 2008. They have three children: Blake, Rhett, and Hunter. Seth has been serving at BCC since 2016. He enjoys spending time with his family, being outdoors, running, a good cup of coffee, woodworking, watching the Kansas City Royals and Kansas City Chiefs, and hanging out with people!